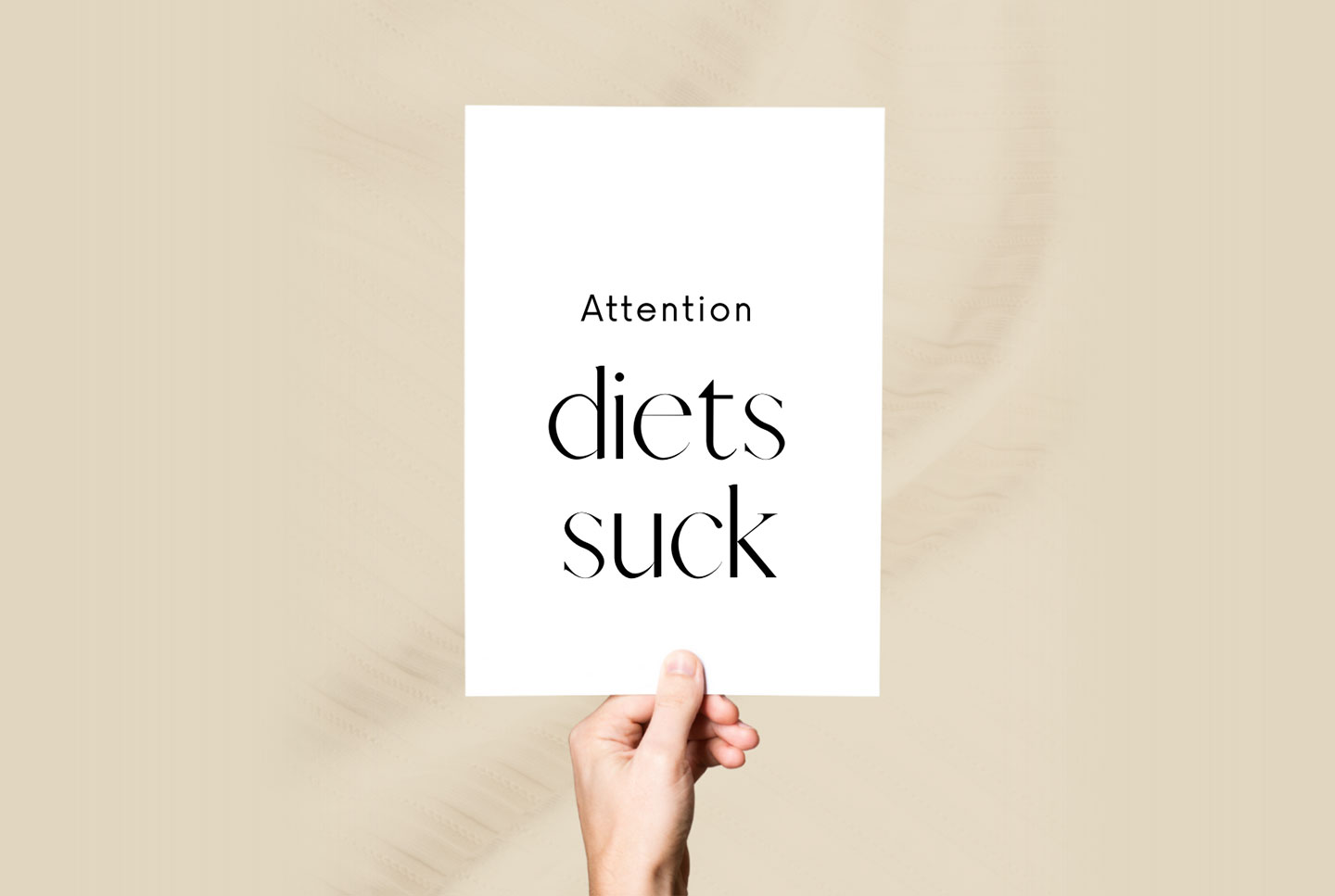 What is the Best Diet to Lose Weight?

When you Google “what is the best diet to lose weight” you get about 536,000,000 results. Can you believe that? 536,000,000 notions about the latest and greatest fad diet or product to drop “x amount of weight in x amount of time.” The way our society has shifted its ideals of beauty has forced women to bend over backward to meet their standards! The diet industry takes advantage of our insecurities and attempts to fit into their mold of beauty. Not to mention that they capitalize off our shame, we’re talking $70 billion a year capitalizing.

The word “diet” itself used to be a neutral word with a simple definition of what a person usually eats. However, the power-hungry diet industry co-opted the word to use it in describing the absence of eating something. The word is now linked to these fad diets that involve certain food rules and often include eliminating certain foods or food groups.

You would think by now, in 2022, we would have figured out the golden secret to weight loss. There must be a straightforward solution to dropping unwanted weight, right? It’s really the complete opposite. Women every day are trial and erroring the latest trends they see on social media or the diets that have withstood the test of time and dominate the diet market today. What’s worse is the toll this takes on us mentally and emotionally. You feel like sh*t  because you “fell off the wagon” again and continue losing confidence in yourself.

Do you often find yourself in this vicious cycle, thinking to yourself, “Why can’t I stick with this diet? Why do I always fall off the wagon?” It is NOT your fault. These diets are essentially setting you up for failure because they are not created to be a sustainable, long-term solution. Let’s get into why these diets are useless and not worth a second of your time.

What is it? This diet wasn’t even originally developed for weight loss! That’s correct – it was designed for a completely different reason yet so many people turn to it for weight loss. Back in the 1920s, it was actually created to treat children with severe epilepsy. Keto is a version of a low-carbohydrate diet. The brain’s cells, called neurons, are mainly fat and rely on fat to fire off electric signals effectively. The idea was to reduce the carbohydrates in their diet and focus on a higher fat and protein intake. Ultimately, this did prove effective in controlling the seizures in those kids!

What it promises: By limiting carbohydrates, your body resorts to fat for energy by causing a process called “ketosis” in your body. You’re burning fat for energy because your body’s preferred source of energy is nowhere to be found.

Why it’s an issue: We can’t ignore the fact that this diet wasn’t meant to help anyone lose weight! In fact, by limiting your carbs, you’re naturally decreasing your fiber intake. Less fiber leads to constipation. With fewer carbs, you are directly impacting your blood sugar levels which will cause mood swings and fuzzy thinking. It could also lead to liver damage based on the disproportionate ratio of fat and carbohydrates. This also doesn’t just work if you eat less carbs, you have to be SEVERELY low to get into and stay in ketosis. You’re aren’t doing keto if you’re not in that state which is very hard to obtain and sustain.

What is it? Oh yeah, we’re going there. This subscription-based app involves tracking your food and exercise habits. Based on your information entered (height, weight, gender, age, etc) the app gives you feedback on your logged food and lifestyle choices to “help you eat better and reach your target weight.” The program tries to convince you that no foods are off-limits but, like any diet, they couldn’t help themselves. You’re actually supposed to limit their deemed “yellow” and “red” food.

What it promises: Noom promises to be your “last weight-loss program.” With its claim to be a comprehensive wellness plan, with food, exercise, and mental health aspects built-in, the main idea is to change your behaviors to take off the weight but maintain the weight loss long-term.

Why it’s an issue: It’s just another fad diet marketed as a long-term, sustainable solution. The foods to limit actually contain significant nutrition like nut butters, seeds, fish all containing omega-3s and good protein in things like chicken, beans, etc. Noom also claims to be a behavioral approach. The funny thing is that weight loss is the number one goal! But weight loss isn’t a behavior, so until you see that loss on the scale, then you will be happy and live your best life.

What is it? Basically a timed eating schedule. You have a certain window of time (usually a few hours) to eat during and then fast in the remaining time.

What it promises: By intentionally depriving yourself of calories during the day and prolonging the period when you’ve burned through those you already have consumed, you’re body resorts to burning fat which may result in weight loss.

Why it’s an issue: There is still little to no research looking at intermittent fasting long-term and its effect on weight loss. By limiting the windows in which you can eat, your blood sugar will fluctuate extremely. This is going to cause mood changes, weakness, exhaustion, trouble focusing, and more. You’re also completely ignoring your hunger and fullness cues and diminishing them by following this kind of eating schedule! This is likely to lead you to extreme hunger and uncomfortably. Ignoring these cues can cause increased cravings and lead to potential binging later on to compensate. Just in general, though, who actually wants to be told when they can and can’t eat?

At this point, WW seems to be a household diet name.  WW claims to be a holistic program for weight loss and wellness. When it comes to food, this diet operates on a points system. It claims that foods are assigned a point value based on their calories, saturated fat, sugar, and protein. You as the dieter are allotted a certain number of points per day to adhere to however you’d like, picking and choosing from the assigned points for foods.

While it might seem tempting and a less abrasive diet plan, it’s still a diet. The huge issue here is that WW puts numeric value on foods, making you continue to internally label foods as “good” or “bad.”  Despite rebranding in the past few years, WW is still focused on weight loss as a measure of success, which as we know continues to feed into the idea that to be loved, beautiful, and accepted in this country is to be a certain size. Side note –  isn’t it interesting that they have changed their approach a million times. If they had it right and it actually worked they wouldn’t have needed to change it so much!

Whole30 is a 30-day elimination diet emphasizing whole foods while eliminating sugar, alcohol, grains, legumes, soy, and dairy. You might be thinking, “well, what’s left?” You’re allowed moderate amounts of meat, seafood and eggs, vegetables galore, some fruit, and “natural” fats like nuts and avocado. Essentially, the program asks you to give them 30 days of adhering to their rules with the promise of “rebooting your eating habits and cravings.”

I give them props for not even trying to pretend to be something it’s not, they use the word “diet” so freely in their advertisements. This doesn’t take away from the fact that it’s still a diet. There’s no scientific evidence that this even has an impact on people’s eating habits and cravings long-term, in fact, most people do end up going back to where they started. Not to mention the fact that their food rules are unbelievably strict and would be miserable to even attempt following.

The common denominator is that they are all rooted in restriction! In some capacity, every single one is asking you to eliminate or restrict a certain food or food group. Any form of restriction is feeding directly into something known as the restrict-binge cycle. Essentially, when we restrict what or how much we consume, it leads to these intense cravings. You’re constantly thinking about food, more particularly those “off-limit” foods. This then leads to feelings of shame and guilt for consuming what you weren’t supposed to. To combat this shame, you feel like you need to gain control of your food and body no matter the cost, so you’re right back to square one and begin the restriction phase again. It doesn’t matter what the diet is, it will inevitably lead you back to the beginning of this cycle because dieting and putting rules around food is unnatural and not a long-term solution. These restricting behaviors also put you at a risk for eating disorders and disordered eating. And don’t even get me started on the mental and emotional turmoil that this cycle takes.

With these diets putting limits on what and how much you can eat, they are therefore just unsustainable. They really set you up for failure because they aren’t meant to be long-term solutions! When you inevitably “fail,” you’ll feel like sh*t about yourself and feel guilt or shame. It’s essentially guaranteed that you’ll feel this way after the diet doesn’t work or last, so why put yourself in that position?

We just do not have the long-term research to prove that these diets accomplish what they set out to do. We know that keto is effective in epilepsy, what it was created for. But that’s about it. Because there’s little proof out there, there’s the risk that continuing on the dieting cycle might lead to health problems. Not only are you at risk for health problems down the road, but you also risk your mental health. The anxiety and negative feelings associated with following these strict regimens and then the aftermath of the failure that isn’t your fault has its own impact.

There is no one-size-fits-all solution for weight loss. Every body is different. It’s okay to have specific health goals, and if weight loss is one of them that’s completely fine! My hope here is that you’re completely turned off to these diets as solutions. Something to keep in mind – if it eliminates, restricts, and/or creates rules around food, it’s a diet. Period. We want to help you find that balance and ditch the diet mentality to reach your goals in a sustainable way. This means honoring your hunger and your cravings, not demonizing foods or food groups, and putting in the work to make this a long-term change for you. If you’re ready to start talking about what this work looks like for you, let’s get on a call and get to it.